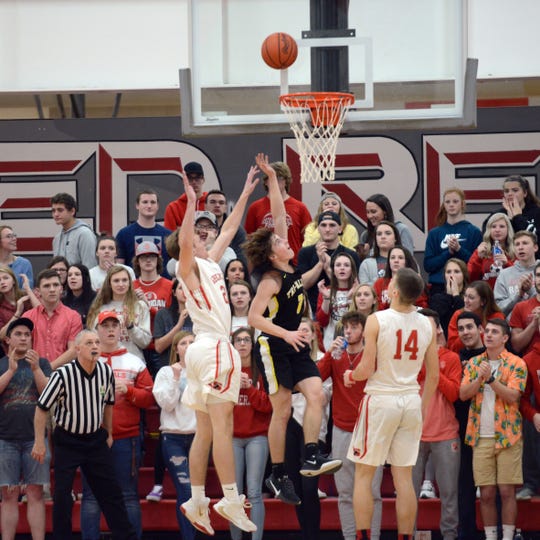 THORNVILLE – Facing the potential of a three-game deficit in the Muskingum Valley League standings, Tri-Valley knew it couldn’t afford another loss.

The task wasn’t going to be an easy one. Their opponent on Tuesday, league-leading Sheridan, entered ranked fifth in Division II by the Associated Press. On this occasion, that didn’t matter.

The Scotties shook off an early deficit with a late run before halftime, had another in the third quarter and held on for a 54-48 win at Glen Hursey Gymnasium.

It was desperate for a rebound performance and played that way, especially in the second half.

“It just shows that we can come back and fight,” said senior guard Skye Bryan, who had a game-high 17 points. “We’re just gritty on the defensive end and that leads to our offense.”

Four players scored in double figures for Tri-Valley, which shot 54 percent on shots inside the arc and attempted only eight 3-pointers. They also got the Generals in second-half foul trouble, which led to an 18-5 edge in made free throws.

Bryan and junior Ty Smith combined for 27 points on 8-of-13 shooting, accounting for half of the Scotties’ offense. They did the majority of their damage attacking off the dribble, an area the Scotties’ coaches stressed prior to the game.

There was a focus on patience and attacking off the dribble, Bryan said, “because coach said before the game that if you get (ball reversal) they’ll give up on defense, and that’s what they did.”

It was no more apparent than on three-point plays from Smith — on consecutive possessions — that helped Tri-Valley finally get the lead at 22-17 with :22.6 left before halftime. Smith had every point in that 8-0 run, two off knifing drives while drawing contact and another basket off a backside rebound.

Tri-Valley never again trailed, as the lead reached as many as eight in the third and fourth quarters. The Scotties were active against the Generals’ taller perimeter players, using their quickness and quick hands to often fluster their offense.

Bryan and Smith were in the middle of that, too. That has been a constant, even in their losses, McLoughlin said.

“One thing about this group, they’ve always played hard,” McLoughlin said. “If you can get kids to compete and play hard, and play unselfish, you can give yourself a chance to win. It doesn’t matter who you are playing. I thought our kids did that.”

Sheridan hit only 8 of 23 first-half shots and shot 43 percent for the game, the result of several misses from close range and an off night from its outside shooters. They were also 5-of-13 at the line.

Many misses came early with a chance to build on a 12-6 lead before Tri-Valley’s offense found its footing. The Generals stayed in the game with an aggressive rebounding disposition — they had 15 on the offensive end alone, and almost half of their points came off second chances.

Shay Taylor’s putback cut an eight-point deficit after three quarters to 42-38, and he scored again on a low post move with 4:30 left to trim the deficit to 43-41. That came after the Scotties, who spent the entire fourth quarter in the double bonus, missed four straight free throws.

Every time Sheridan got close down the stretch, however, the Scotties had the equalizer.

Jack Lyall’s 3 from the corner, after Sheridan missed a layup to tie one possession earlier, extended a two-point lead with 2:06 left. After Ethan Malone sank two free throws the next time down, Keaton Williams converted a three-point play after Smith broke free and delivered a perfect bounce pass.

It was a double whammy for the Generals, as Tri-Valley also milked almost a minute off the clock. The deficit was 51-45 with 1:36 left, and Sheridan never got closer than four points the rest of the way.

“We were a lot more patient tonight than what we were the first time,” McLoughlin said, adding his team didn’t force the action and play into the Generals’ hands with ill-advised shots. “Skye got downhill. We were getting into the paint.”

The possibility of falling three games back in the standings, coupled with the earlier loss to at home, was all the motivation Tri-Valley needed. The desperation showed in its fourth quarter defense, which held the Generals to only one field goal in the final 4:01.

“We’ve been down about that game ever since,” Bryan said. “We’ve just kept our heads up and fought back, and that’s what we did tonight.”

Williams added 15 points and Smith and Lyall 10 each for Tri-Valley, which hit 17 of 36 field goals and 18 of 28 free throws. Smith also had team highs of three assists and three steals.

Taylor, who muscled his way for a team-best 14 points, felt his team underestimated the Scotties after their win against them earlier in the season and their loss to Maysville last Friday.

He said the team can learn from the loss.

“We just didn’t prepare for them like we should have,” Taylor said. “We should have recognized that they were going to come out ready and come at us, even though they had a couple of losses previously.”

Sam Blackburn is a reporter with the Zanesville Times Recorder. He can be reached at sblackbu@gannett.com, at 740-450-6723 or on Twitter at @SamBlackburnTR.