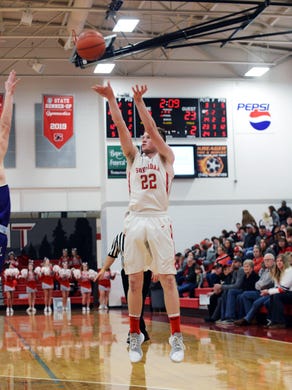 THORNVILLE – Logan’s 3-11 record was a deceptive one, since the majority of its independent schedule has come against Division I teams from the Central District.

That fact wasn’t lost on Sheridan coach Doug Fisher, a veteran of almost three decades in coaching who has seen this story before. He warned his team about that very subject prior to their game against the visiting Chieftains on Tuesday night.

It didn’t fall on deaf ears. The Generals overcame an off shooting night by forcing 20 turnovers and scoring 17 straight fourth-quarter points in a 57-32 win in a nonleague game at Glen Hursey Gymnasium.

“That was our big emphasis going in,” Fisher said. “They’d be one of the better teams in (the Muskingum Valley League) this year if they were in it. Every one of their games was against somebody good. I didn’t even put their record in the scouting report.”

Junior Ethan Malone led another balanced night from the offense with 14 points — four each in the first, third and fourth quarters. Classmate Landen Russell scored nine of his 11 in the second half, including a 3 in the third that pushed a nine-point lead to 35-23. Another junior, 6-2 post man Shay Taylor, added nine points on a night he shot 13 free throws.

Sheridan (13-2), ranked eighth in Division II by the Associated Press, has now won two in a row since a 54-48 home loss to Tri-Valley that knocked them from the unbeaten ranks in the MVL.

It never trailed after jumping ahead 7-0 and led after every quarter.

“When you lose a tough game like that, you want to get out there and play again,” Fisher said. “(Philo) was kind of a good game to have right after that. Defensively, we didn’t play very good man-to-man defense (against Tri-Valley). We were getting beat off the dribble, and once we get behind it was hard to sit back in our zone or switch things up as much because we had to guard them.

“That was the big difference in the game,” he added. “They went by us and got fouled, that’s why they shot 24 free throws in the second half.”