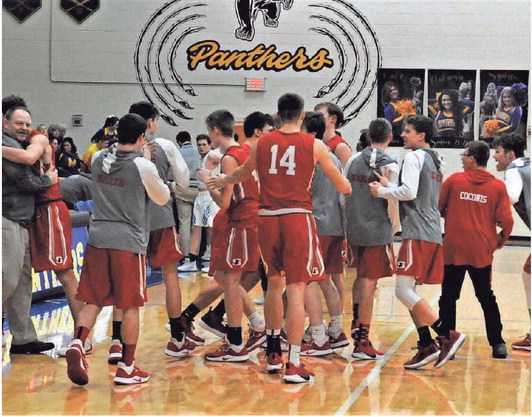 NEWTON TOWNSHIP – Luken Hill remembers the sting of missing out on last season’s Muskingum Valley League title. The Sheridan senior wasn’t going to let this group of Generals have that same feeling. Hill poured in a game-high 19 points and made the game-sealing block and free throw in Sheridan’s 71-67 overtime triumph against host Maysville on Tuesday.

“Last year, we had one of the best teams in Sheridan history, but we slipped up once or twice and didn’t win the league,” Hill said. “We’ve had comeback wins all season. We knew we could come back from (the deficit) and it feels good to get this and win the league.”

Sheridan finished 14-2 in the MVL and 19-3 overall to earn its first league title since sharing the crown with John Glenn after the 2010-11 season. The Generals face New Lex to open the Southeast sectional on Tuesday, Feb. 18.

Watching his team battle through adversity again did not surprise coach Doug Fisher. He saw the team’s heads lift once they took the lead in the fourth. “When we were down nine in the third, I could see some heads sinking, and our body language wasn’t good,” he said. “We told our guys, our season was on the line. We had led the league for 90 percent of the season so it would have been a letdown not to finish it off”. “We battled back, and our confidence grew as we got closer,” Fisher said. “I’m proud that these guys pulled it out, Hopefully, this gives us momentum heading into the postseason.”

The Generals faced an uphill battle from the start. They trailed 9-2 in the opening minutes before tying the game at 18 after one quarter. Maysville (9-11, 8-7) built a 32-25 halftime advantage behind a pair of 3s from Kaiden Hartman. The Panthers extended their lead to nine three times in the third, including 46-37 after a Hayden Jarrett hoop with 1:30 left in the quarter. But, Sheridan took momentum into the fourth when Nate Johnson scored on a putback then hit a 3 to cut the deficit to three, 48-45, in the final 30 seconds of the third.
The Generals grabbed their first lead since the second quarter when Hill’s putback made it 51-50 with 5:40 left in regulation. The teams exchanged the lead five times before Hill split a pair of free throws with 1:36 left to make it 56-55 Sheridan. Maysville then ran the clock down to under 10 seconds before Hartman was fouled on a drive. He made the second free throw with 3.7 seconds to tie the game, and Johnson’s 3-point attempt at the horn was off the mark for Sheridan.

The game was back and forth for the first half of overtime. But, Sheridan took control when Landen Russell converted a three-point play to put the Generals ahead for good, 61-60, and after a Maysville turnover, Ethan Malone drilled a 3 to stretch it to 64-60. The advantage grew to seven at one point, and Sheridan was up 70-64 when Adam Armstead hit a 3 with about 25 seconds left in overtime. After the Generals missed two free throws, Maysville had one more chance, but Hill blocked Mason Swauger’s 3-point attempt then sealed it with a free throw. “It’s definitely nice to know some of us have been in that situation before,” said Hill, who also had 10 rebounds and three steals. “There’s times where we have slumps, and sometimes, we have too much confidence and don’t play well. We believed we could come back, and we found a way.”

Johnson, who made four 3s, chipped in 18 points and seven rebounds, Russell finished with 13 points and four assists and Malone scored eight with three steals for the Generals, who were 24 of 50 from the field and 6 of 20 behind the arc. Hartman drilled six triples on his way to a game-high 25 points for Maysville, which was 23-of-51 shooting, but just 1 of 7 in the fourth quarter. Quentin Stottsberry added 12 points and Armstead had eight points in the losing effort.

Brandon Hannahs is a reporter for the Zanesville Times Recorder and Coshocton Tribune. He can be reached at 740-450-6763, bhannahs@gannett. com and on Twitter, @brandonhannahs.